September 2021 Graduate in the Spotlight 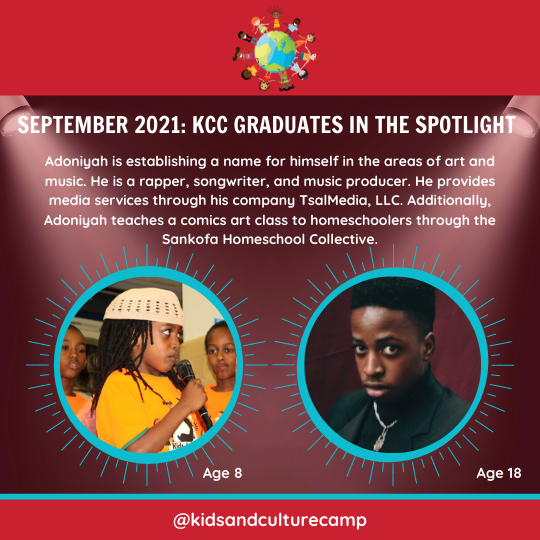 This month we celebrate the accomplishments of Adoniyah Ben-Tsalmiel. Adoniyah has been a KCC camper since age 7 when the camp first began in 2010. He is the youngest of three brothers who have all been homeschooled since birth. Adoniyah was a hit at KCC’s Festival Fridays with his rap performances as part of the 10-12 class presentations. He attended KCC until he turned 13 and then became a camp counselor in training (CIT). As an older teen, Adoniyah took his experiences as a camper and CIT at KCC and went on to serve at another camp in Washington, DC, as a junior counselor, counselor, and most recently a STEM Program Leader. Adoniyah is making a name for himself in the areas of music and art. He is a rapper, songwriter, and music producer, who launched his own media venture, TsalMedia, LLC earlier this year. A talented artist in his own right, Adoniyah also teaches a comics art class to students through the Sankofa Homeschool Collective. The class, The Black Ink in Comics, highlights comic book writers and illustrators of color bringing more awareness to aspiring young authors. You can learn more about Adoniyah’s comic art class here. You can keep up with Adoniyah’s musical creations here.

REFUND POLICY.  Please note that the refund policy for the online camp program is different than the in-person camp refund policy. Due to COVID, KCC will refund the 10% deposit or any funds paid to secure your child’s space with one exception. Registration processing fees charged by ACTIVE are non-refundable. A refund will be honored, less ACTIVE’s processing fees, if notification is received by the camp registration office in writing, via email, at least two weeks before the scheduled session that you want to cancel.

No refunds will be honored thereafter (unless the minimum number of 10 campers needed is not met. Make-up days are not an option). Payments for registrations must be paid in full at least two days before the start of each camp week. Payment plans are available.